Here is the penultimate episode in our Star Wars event! I hope you've liked what we've shown you so far, because here is one more:

Another item to add to your list of creative, functional, and fun stuff - here is an umbrella that doubles as a light sabre! This one features Obi-Wan Kenobi's handle, but there is a light sabre umbrella for many of our favourite characters: Darth Vader, Yoda, and Luke Skywalker. Not only will you have a weapon against your force-wielding enemies, you'll also be protected against the rain! These light, durable umbrellas are sire to impress anyone who loves sci-fi.

Answer to yesterday's question: The animation studio Pixar was founded as the Graphics Group, one third of the Computer Division of Lucasfilm. Pixar's early computer graphics research resulted in groundbreaking effects in films such as “Star Trek II: The Wrath of Khanand”, “Young Sherlock Holmes”,and the group was purchased in 1986 by Steve Jobs shortly after he left Apple after a power struggle at Apple Computer. Jobs paid U.S. $5 million to Lucas and put U.S. $5 million as capital into the company. 
Hello again! Today is another Star Wars day, so get ready to be amazed by yet another fascinating item, bringing Star Wars into your everyday life! Today I present: 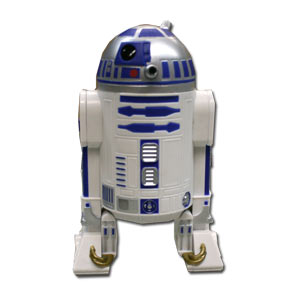 Now you can equip your table with our favourite astromech, R2-D2! This shaped soy sauce bottle is just what you and your Star Wars loving friends need to eat your sushi, along with yesterday's light-up light sabre chopsticks. R2-D2 can repair your dinner ship anytime with free-flowing soy sauce! These cool Star Wars products are only available from Japan, so don't miss your chance to treat a friend or even yourself to a great Star Wars gift!

Answer to yesterday's question: ”George Lucas is a filmmaker, with a film career dominated by writing and production. Aside from the nine short films he made in the 1960s, he also directed six major features. His work from 1971 and 1977 as a writer-director, which established him as a major figure in Hollywood, consists of just three films: [i]THX 1138, American Graffiti , and Star Wars . There was a 22-year hiatus between the original Star Wars film and his only other feature-film directing credits, the three Star Wars prequels.

Lucas acted as a writer and executive producer on another successful Hollywood film franchise, the Indiana Jones series. In addition, he established his own effects company, Industrial Light and Magic (ILM), to make the original Star Wars film. The company is now one of the most successful in the industry.“[/i]


Welcome back! Continuing with the Star Wars theme, I shall show you another innovative, creative, and overall amazing Star Wars item:

Enjoy your food and experience the Force with these glowing chopsticks! Based on either Darth Vader's or Luke Skywalker's light sabre, you can even use them to eat your food in the dark! What kind of Star Wars fan would not want to eat their food with a pair of mini light sabres? Just a simple button press and you have light! Great for epic food wars, Jedi vs. Sith!

Answer to yesterday's question, submitted by KidA: Star Wars Episode IV: A New Hope (originally known as Star Wars) was the first of the Star Wars saga to come out on May 25, 1977.

Today's question: Who wrote the first Star Wars movie, and what are some other movies he worked on? .

Ads
All images are copyright of their respective owners. Copyright © 2007-2020 Goral Software