Treasure! Scroll down and claim the chest. [close] 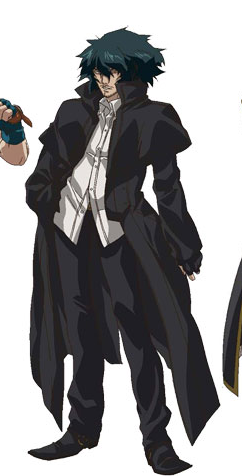 Appearance:
Lintence is notable for his dark-green, wavy and volumed hair style. He is mature, has slit-eyes and usually wears a serious look. He dons a long, black coat over a white shirt that is untucked, over black pants. His shoes are black cowboy boots. It is also noted that he wears black glovelettes.

Personality:
He has a very serious and hostile demeanor. To fully utilize his skills, he would travel to cities and seek the environment to fulfill it. After days and months of wandering for over five years, he arrived at Grendan.

Skills & abilities:
Lintence wields the Heaven's Blade-Gloves. Using his incredible martial arts capabilities, he used his kei to create some of the largest and intricate steel wires to trap filth beasts like a spider, capable of splitting the steel wires to fatally cut through large filth beasts and can even create a circular cell to contain them if necessary.
For unknown reasons, he mentored his Steel Wire skills to Layfon "Wolfstein" Alseif and helped train him into the fighter he is today. His competence as a mentor is far greater than Layfon, since the number of steel wires Lintence could amount to is known to be tens of thousands to hundreds of millions.


2009 was a great year for anime. We have all kinds of interesting and fascinating trivia from this year to share with you. The most viewed series from that year on Anime Characters Database is Fairy Tail ( 300 views ). Our series view count resets each month as to give you a rolling idea what is currently popular. A total of 104 titles were released in 2009. Don't forget to have a look at what was most popular - you can even filter the list by genre helping you to more quickly spot titles that may be to your liking. By the way, it is possible we missed a title from this year, and we could use your help adding it! Let's continue with the trivia. The most violent of these is considered to be Whispered Words ( Avg. Rating 5.0000/5.0000 ) and the least violent is Jewelpet ( Avg. Rating 0.0000/5.0000 ). Members have the option to assign a violence rating to their favorite series. The series with the most characters is Fairy Tail ( 220 characters ) and the series with the fewest is Iljimae The Animation ( 1 characters ). Most titles have at least 10 characters by their final episode. We can always use help adding characters we missed! Please be sure to read this guide to adding characters first if you are interested. The series with the longest title is The Best!! Extremely Cool Student Council President ( 51 letters ) and the series with the shortest title is Saki ( 4 letters ). I hope you found this information interesting, and continue to explore ACDB to your hearts content. ^_^